Fire and Emergency NZ (FENZ) organised a live fire burn demonstration early May 2018 and we were privileged to be there.

Etienne Hermouet, Engineering Team Leader at Fire and Emergency NZ Auckland, kick-started the day with a health and safety briefing and an overview of the five different live-burns, four of which were freight containers staged in various room setups – bedroom, lounge, kitchen and office. The fifth demonstration was a lab-scale ISO model of a compartment demonstrating how backdraft might occur in real life. 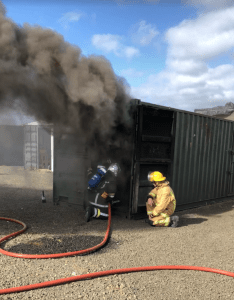 Fires in each of the room setups were started either by a gas torch to the furniture or by a Molotov-cocktail, similar to an arson attack. The rooms were all equipped with smoke detectors which were observed to activate soon after the fire started and before a lot of smoke was produced in the containers. It did not take long before the flames started engulfing the near-by objects, especially within the lounge and bedroom setups, where a lot of combustibles such as upholstered furniture and beddings were present.

It was observed that smoke from every room setup started to transition from a milky-white colour to dark-sooty smoke as the fires developed. Smoke leaks were prevalent through gaps around closed doors and ceilings. This showed how smoke can always find its way around construction gaps, causing threats to building occupants in adjacent spaces before any flames spread.

As the fire continued, the smoke layers dropped below eye-level and the conditions inside the compartments became completely untenable. Scenarios like these are essential reminders of the importance of fire alarm systems to provide early detection and warning and reduce the risk of smoke incapacitation especially in sleeping occupancies. They also remind us about the importance of effective emergency lighting and illuminated exit signs to assist egressing occupants.

The fires were immediately put out by the firefighters on site when flashover occurred. Flashover is when all exposed combustible surfaces in a room ignites, triggered by high temperature and radiation from the hot upper layer. 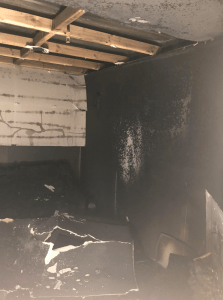 When the compartments became clear of smoke, we were able to inspect the aftermath of the fully developed fires. Ceiling and wall linings had collapsed while structures exposed were burnt and charred to different degrees. Electrical switches and objects at the lower level had mostly melted due to the intense heat from the hot upper layer.

In the last demonstration, the fire was initiated by igniting wood cribs in the lab-scale ISO room model to illustrate backdraft. Backdraft is a type of smoke explosion resulting from rapid introduction of oxygen to an oxygen-depleted combustion, for example opening a window in a tight- construction room where most of the oxygen has been consumed by the fire. The result is an explosion that can break windows, knock down walls and pose serious life hazards to firefighters.

Fire and Emergency NZ firefighters have been trained to recognise signs of dangerous situations such as backdraft and flashover and ways to deal with these situations to protect themselves against unnecessary injury and to control the impact of fire. This made this day so worthwhile, as Etienne showed us the equipment used on fire trucks, the equipment carried by the firefighters in emergency situations and how they use this equipment.

It also confirmed the importance of constructing and finishing a building exactly as designed, and understanding and paying heed to manufacturer’s specifications. Watching these fires being put out also highlighted just how dangerous high temperatures, low visibility and the possibility of backdraft can be for fire fighters fighting real fires.”

By Mona Liu and Jen Tang